You walk out to your car and it’s covered in yellow dust. This is how you know it's spring...Pollen! Where did all of it come from and how far did it travel to land there? How much of it are you breathing in as you stand there in dismay? If you have allergies the amount may not matter, you’ll be feeling the effects soon!

Airborne particles can be transported thousands of miles from their source. In fact, there is an entire science dedicated to understanding the wind-driven emission, transport, and disposition of sand and dust by the wind called the aeolian process.

In nature, the effect of this process has been shown in components of the earth systems such as weather, climate, and ecosystem productivity. The movement of these particles by the wind has even shaped much of our planet’s surface.

What does the physics of wind-blown particles have to do with historical restoration?

Blasting the exterior of a building means the potential to force particles of abrasive and residue into the air. It’s our job to take necessary precautions to contain as much of that material as possible to reduce the risk of impacting the environment around us.

Despite our best efforts, containment is not 100% so much consideration is also given to the media used and making an effort to use environmentally friendly abrasives when possible.

One of Leavenworth’s oldest foundations is the Sisters of Charity of Leavenworth. In 1923 they opened St. Mary’s Junior College and expanded it to a four-year college 7 years later. This is now the University of Saint Mary’s. On their main campus in Leavenworth is the Mother House, dedicated in 1940. This beautiful building is the home to many retired sisters and is a treasured part of the city’s history.

Unfortunately, all buildings require constant upkeep and maintenance. The metal cornice on the building was constructed of pressed steel that had been painted but was started to show its age. To restore the look of the building, our customer needed the failing paint and rust removed from the metal surface to prepare it for needed repairs and a new coating.

In this application, there are a couple of good options we could use. Glass beads, walnut shells, and garnet would all be abrasives that could be used on steel to adequately prepare the surface as desired. However, as with any job, there are more factors to consider. On this project, our decision needed to consider the health of the people, access to the building, and preserving the aesthetics of the historical site.

The building is occupied by an older population whose health is a high priority. In addition to the residence of the building, there is a lot of foot traffic in and around the building due to campus tours and students.

Great pride has been put into the maintenance of this beautiful facility and the surrounding grounds. When a project is complete, we don’t want there to be any evidence of our work besides the successful completion of the project blasting the metal cornice.

Along with being considerate of the residents, there are weekly tours that this building is part of and a conference room located there used by the university and charity. Thus, it was important to keep the circle drive and entrances free of debris and equipment for residents and visitors as much as possible.

Keeping these reasons in mind, garnet was the best media for the job. Garnet is nonhazardous to the environment as well as a very sharp media. It was able to cut quicker than most and not create a lot of friction. Reducing heat from friction was important so that we did not cause warping to the steel resulting in damage to this historical component of the building. Additionally, it is low dusting and a naturally inert mineral. 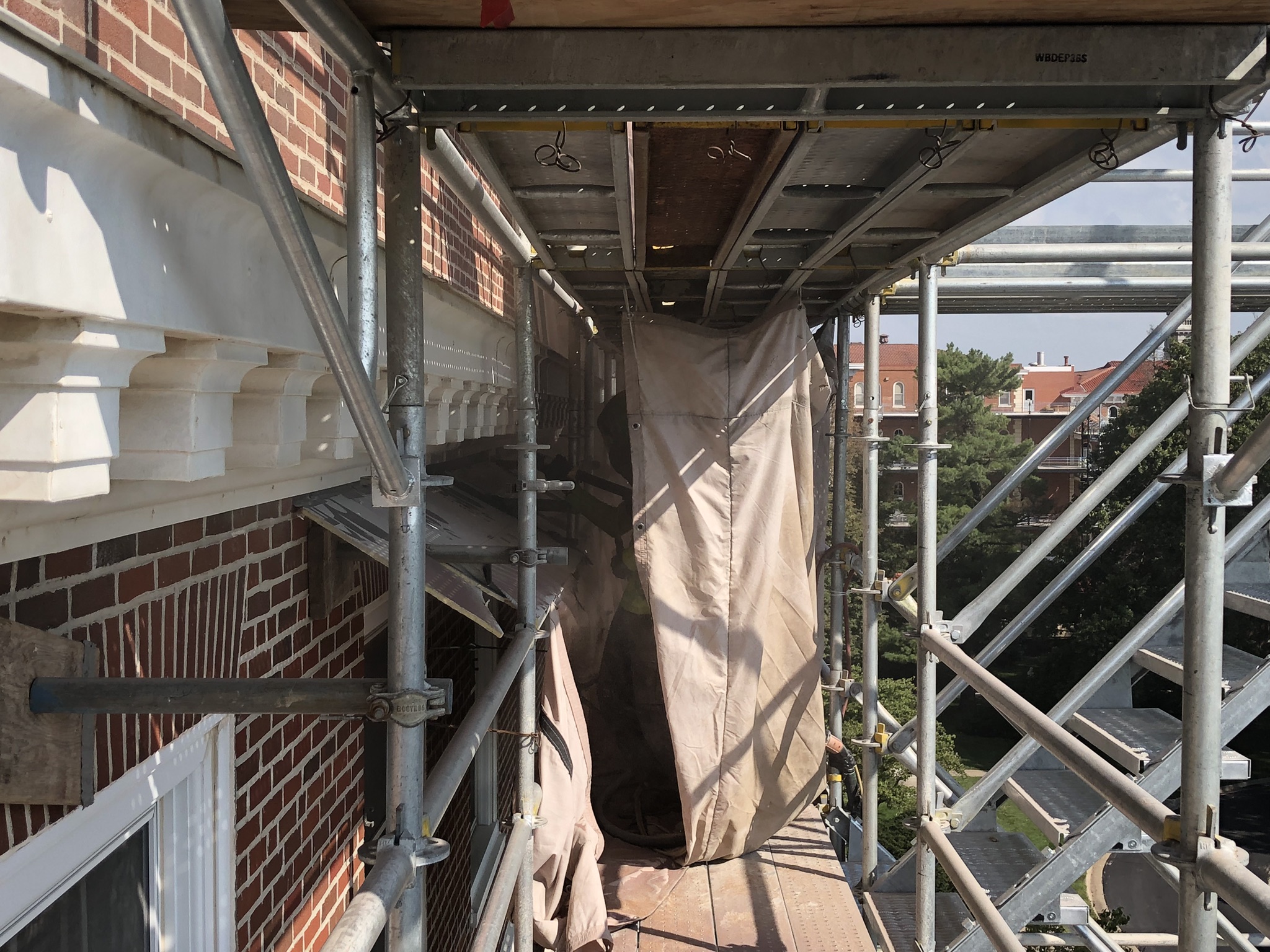 While using an environmentally-friendly abrasive, we still needed to make sure we made every attempt to contain the particles from being airborne. When performing this job 65+’ off the ground, the importance of containment is only magnified. We were not only worried about it drifting in the air, but also directing its path to the ground. Due to the accessibility requirements, we were only able to use scaffolding on two sides of the building.

With scaffolding, we could sufficiently enclose the areas we were blasting with a tarp. The other two sides had to be done with a lift so we used a tarp around the basket of the lift to funnel the residue onto our perimeter of ground containment cleaned-up daily.

Even with all the efforts and precautions taken it is important to remember containment cannot guarantee every single particle is accounted for. This is why we didn’t want to risk using walnut shells not knowing who would have accidental contact and potential allergic reaction.

Our 3-man team worked their way around the building setting up containment and clean-up as they went. Working patiently and carefully in small sections of metal cornice minimized disruption and our impact on the people and the environment. 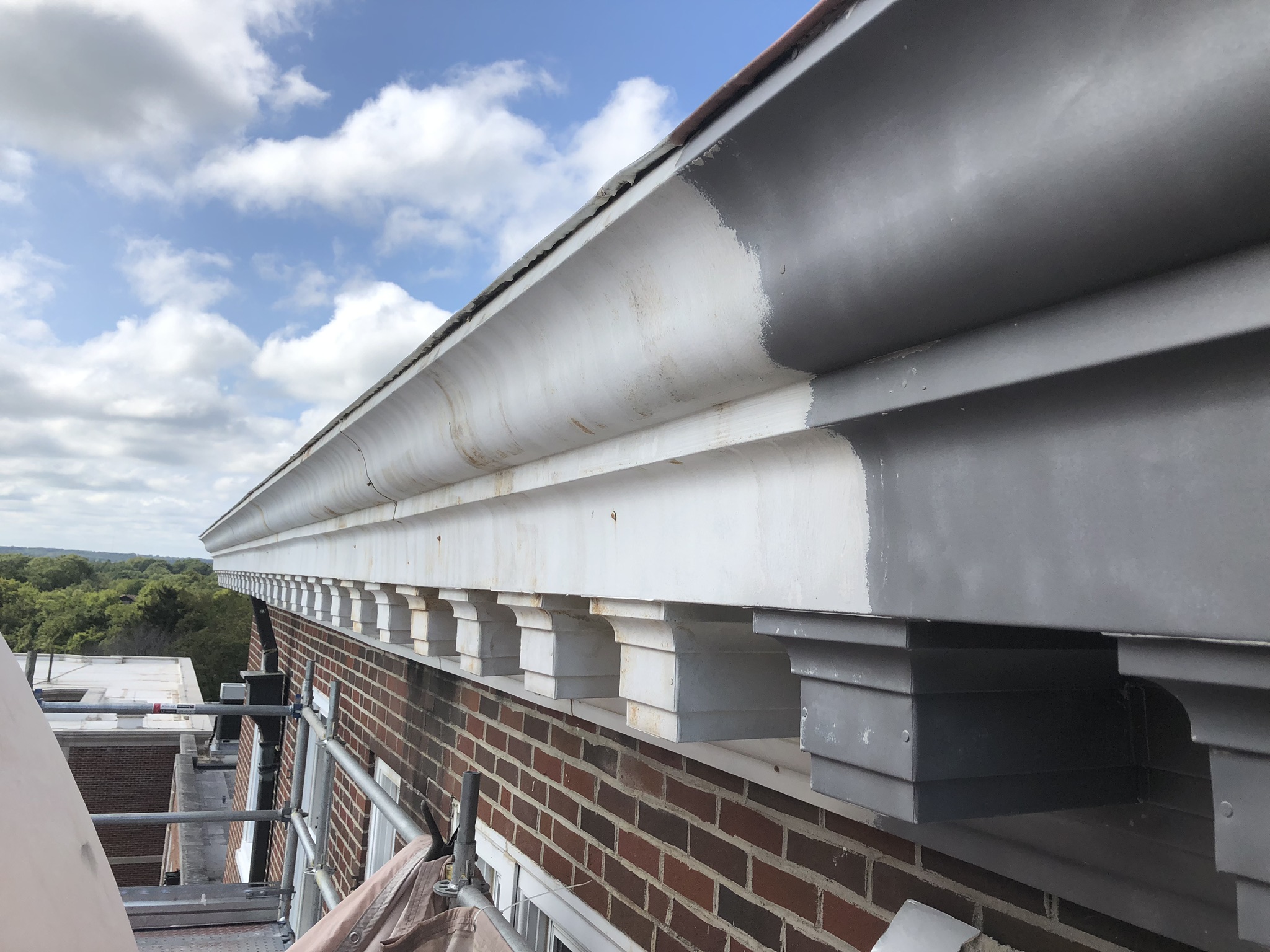 If you need a responsible company to join your team for a restoration project, fill out our contact form or give us a call at (877) 379-4233.